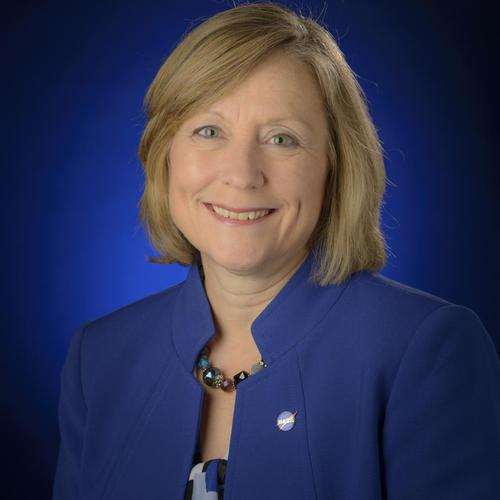 Talks covered by this speaker

Kris Brown serves as deputy associate administrator for the Office of STEM Engagement, providing leadership of NASA’s STEM Engagement function and its programs, devoted to creating unique opportunities for students and the public to contribute to NASA’s work in exploration and discovery, and to building a diverse future STEM workforce by engaging students in authentic learning experiences with NASA’s people, content and facilities. Kris began her career at NASA Goddard Space Flight Center over 25 years ago as an engineer, devoting most of her career to working on flight programs and as a leader in engineering. As a result, she brings unique perspectives as a STEM practitioner to her role, coupled with a strong commitment and passion for inspiring and engaging young people to pursue STEM education and careers. Immediately prior to her arrival in Education, Kris led an agency team to define a new vision and direction for NASA’s work in public and STEM engagement, creating the roadmap for NASA’s future work in this realm. Previously, Kris was Director of the Strategy and Integration Division in NASA’s Office of Communications, serving as a key member of the leadership team managing a headquarters organization of 80 staff and orchestrating an overall program encompassing 350 people. With a focus on strategic communications, Kris was the architect and leader of a comprehensive effort to transform the operating model for NASA communications, toward more effectively engaging people around the globe in NASA’s mission and work. Earlier, as Deputy Chief of NASA Goddard’s Office of Communications, Kris was responsible for leading the organization responsible for the center’s communications and public engagement program. Previously, Kris served as NASA Goddard’s Special Assistant for Strategy and Development. There, she led a diverse set of initiatives to enhance Goddard’s productivity, workforce, innovation, work environment and capacity to engage the public. In 2008, Kris led the development of Goddard’s strategic plan, Blueprint for the Future, literally engaging hundreds of employees in the process. She also served as a co-author of NASA’s formal response to the Columbia Accident Investigation Board Report. In addition, Kris contributed to strategic efforts in education human capital, and information management. Throughout her career in engineering, Kris led endeavors devoted to advancing the state-of-the-art in practice and capabilities. She served as Head of Systems Engineering Services and Advanced Concepts. Kris led the creation of the organization, charged with delivering systems engineering services and leadership in the conceptualization of future NASA missions, and developing and infusing enabling processes, tools and capabilities. As Project Manager for NASA’s Integrated Mission Design Center, Kris led a team in creating a new collaborative design capability for spaceflight mission design, from its inception through development and operations. At the request of NASA’s Chief Engineer, Kris led the Advanced Engineering Environment program, dedicated to building NASA’s next generation of engineering capabilities and infrastructure. Earlier, she served as mission systems engineer and mechanical systems manager for several spaceflight missions. Prior to government service, Kris spent 7 years in the private sector. Kris earned a B.S. in engineering from Virginia Tech. She is a graduate of NASA’s Project Management Development Emprise program. Kris was a Fellow in the Council for Excellence in Government, where her team was honored for creating the Kids In Science and Technology (KIST) initiative, dedicated to providing hands-on learning opportunities to kids. Kris has been awarded NASA’s Medal for Outstanding Leadership, Goddard’s Outstanding Leadership Honor Award and NASA’s Medal for Exceptional Service. Beyond work, Kris is actively engaged in the community and in the performing arts. A semi-professional classical singer, she is soprano section leader at St. Paul’s K Street in Washington, DC, and has been a member of the Woodley Ensemble and Cathedral Choral Society. Kris serves as an officer for the Cathedral Choral Society Board of Trustees, and served as the President of the Woodley Ensemble Board of Directors. She has volunteered in schools, and served as Co-Chair of the Walt Whitman High School Festival of the Arts as well as parent coordinator for performing arts at St. Andrew’s Episcopal School. Kris is the proud mother of two sons.

Your logo could go here!

If you'd like to get your brand in front of attendees following the categories this speaker is talking about (on this page, via email and during each talk) contact us.
We use cookies This website (and some of its third-party tools) use cookies. These are important as they allow us to deliver an exceptional experience whilst browsing the site. Learn more about our cookie policy. By closing this banner, scrolling, clicking a link or continuing to browse, you agree to the use of cookies. Accept
I need help
No I need help
No I need help